The Trouble With Witches
Shadowvale, book 1
Paranormal Romance
May 13, 2019

No one knows this as well as raven shifter Deacon Evermore, who, like everyone in his family, has a curse. While his position as Shadowvale’s peacekeeper lets him use that curse for good, he’d rather live anywhere else. He stays for his family, but doubts he can last much longer.

Fledgling witch Emeranth Greer is determined to escape her past and make a fresh start in Shadowvale with the aunt she’s never met. Her aunt and the town prove to be far better than she imagined. There’s no way Em is leaving this magical place. Especially when staying means more time with the handsome Deacon.

But when Em’s troubled past catches up with her and nearly destroys the romance budding between her and Deacon, her instinct is to run again. Except there’s magic in the mix now and the town won’t let her leave. Only Deacon can save her, but can a cursed man clear her name…or will her history destroy them both? 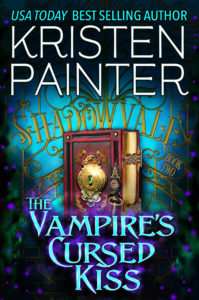 Vampire Constantin Thibodeaux was cured of his sun “allergy” when he moved to Shadowvale. Now he runs the local bookstore, which is really just a sideline to filling his own library. Books, unlike people, are far more forgiving of his prickly nature. But he doesn’t care if people don’t like him. He is who he is. And he’s happy. Well, he’s content. Okay, he’s…fine.

Sprite and all around party girl Andromeda Merriweather loves her carefree life – or at least she did until her sister cursed her into a magical time out. Thankfully, she’s just been set free by a totally hot, but kind of grumpy vampire. Too bad this handsome grouch now holds the key to her freedom, something she’ll only get if he agrees to abide by the rules of her curse.

Constantin isn’t interested in the terms and conditions Andromeda gives him, until he needs her to be his temporary girlfriend to shut his brother up. Then Constantin agrees. But what happens after a surprisingly fun evening creates brand new problems for both of them. Sure, two opposites can attract, but will that attraction last? Or are they both too cursed to give love a chance? 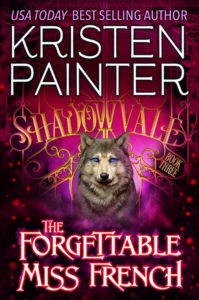 Werewolf Virginia “Ginny” French’s curse means no one can remember her. Not even for as long as it takes to ring up her groceries or make her favorite iced coffee. And being that forgettable has turned her life into an incredibly lonely existence. So much so, she’s thinking about doing something really wild just to entertain herself.

Werewolf Ezekiel “Easy” Grayle loved his life until he got struck by lightning and lost control of his shifting abilities. It’s led to some uncomfortable situations – and the decision to move to a town where the unpredictable is acceptable.
He didn’t realize just how acceptable until he catches his hot but maybe-crazy neighbor sneaking out of his pool in a barely-there bikini. He’s too busy unpacking to pursue her, but when she comes knocking, all bets are off.

Can a forgettable woman ever find love or is her curse too much for even the most determined man to overcome? 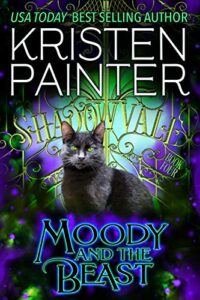 Exiled king of the goblins, Robin Gallow, has no choice but to live in Shadowvale. That was the deal he made with his ex-wife and current queen of the goblins in exchange for the antidote to the poison she gave him. Now, the town has become his prison and his world is closing in on him. It’s enough to drive a man insane.

Theodora “Moody” Middlebright wants nothing to do with Shadowvale or the royal beast she’s about to spend the next year of her life with. But her father owes the man a debt and he’s too unwell to pay it himself. So Theo has come in his stead. Doesn’t mean she’s one bit happy about it. But then Theo hasn’t been happy about anything since her mother died.

Turns out, Theo’s sharp wit and brash attitude are the breath of fresh air Robin didn’t know he needed, and the two somehow hit it off. But when his trust issues and her secrets collide, their budding feelings for each other are threatened with extinction.

Can Robin learn to trust a woman who’s kept her true identity hidden her whole life? Will it even matter if Theo thinks he’s the beast everyone believes him to be? Or will love give them both a brand new start?

Most people think Nasha Black lives in Shadowvale because that’s where her father, one of the Four Horsemen of the Apocalypse, lives. But Nasha has another reason for staying in Shadowvale and it’s not just the bakery she owns and operates. She has a devastating curse of her own. One she’s never told a soul about.

Shadowvale has given chocolatier and dragon-shifter Charlie Ashborne a refuge from the reality of his cursed life. Until now. He’s been summoned to the dragon census, where all unmated dragons will be paired off. If he doesn’t show, the dragon council will come to him. His desire to protect Shadowvale means not only will he end up with a wife he doesn’t want, but the curse he’s kept hidden for so long will be exposed.

Facing certain humiliation, Charlie is about to leave for the census when an attractive woman shows up at his house, desperate for more of the chocolates Charlie sells in his shop. Nasha needs to know what magic he puts in his chocolate. She’s never tasted anything like it, literally, and it’s changed her life. Discovering he’s headed out of town pushes her to make a crazy offer. She’ll pretend to be his wife in exchange for his recipe. Seems fair enough. Making a pact with a chocolate addict might not be the right move, but Charlie will do anything to avoid the dragon census mating games, so he jumps at the chance to claim Nasha as his wife for a week. It seems like the perfect plan, until they find out the rules have changed, leaving them no choice but to compete in the games.

Unexpectedly, they begin to fall for each other, amazed by what a good team they make. But as competitors try to tear them apart Charlie and Nasha wonder if they will ever taste sweet victory, or just the bitter dregs of defeat?